GHOST IRIS (Long Branch Records)
From Copenhagen, comes the most streamed Danish metal act of 2016 and one of the rising stars in the djent and tech-metal Ghost Iris. Following up the recent 2016 breakthrough the band released their second full length album "Blind World" via Long Branch Records on 17th of February, 2017.

FIGHT THE FIGHT (Indie Recordings/Metal Blade Records)
The Oslo based melodic Metalcore band Fight the Fight just recently released their self-titled debut record via Indie Recordings and this one is young, fresh and bursting with energy. It is a mature, well-composed rock/metal grenade with immediately memorable hooks, catchphrases and choruses.

Already supporting great acts such as August Burns Red, Satyricon and Devin Townsend Project on the road in Europe these guys are set to explode!

AVIANA (Rambo/Sony Music)
The future of Swedish Metalcore; Aviana delivering a hardhitting riffy style with earcatching melodies, by many described as a perfect mix of Djent and traditional Metalcore. Seen as one of the most anticipated European newcomers during 2017 the band is now hitting the road again.

With an approximate number of 50,000 monthly recurring listeners, Aviana (despite their recent formation) keeps growing with a rapid
speed, as a fact the latest single "Solar" being streamed over 1,000,000 times on Spotify in just a year after the release.

AWAKE THE DREAMER
Following the footsteps of the likes of bands such as Northlane, Architects and Stockholm hometown friends in Adept, Awake The Dreamer has made a great name for themselves on the European Metalcore scene since the bands formation in 2015.

These guys will open the shows on the European leg of the Scandinavian Invasion Tour '18 joining Ghost Iris and Fight The Fight in London to Hamburg, before hitting the road again this summer for multiple festival appearances and another Euro Tour supporting Adept and Crystal Lake in July.

This spring Scandinavia will be experiencing an invasion of the finest Scandinavian Progressive Metalcore artists currently out there. Danish Dynamites Ghost Iris​, Swedish Screamers Awake The Dreamer, Norwegian Noisemakers Fight The Fight​ and Swedish Soundwallers Aviana​ formed an alliance to hit the roads together and bring their energetic live performances to those stages that we all love. The Nords are coming - be prepared!

​GHOST IRIS
Hailing from Copenhagen comes the most streamed Danish metal act of 2016 and one of the rising stars in the Djent and Tech-Metal scene, Ghost Iris. Following up on their breakthrough in 2016 the quintet released their second full length album "Blind World" via SPV / Long Branch Records in February 2017 - an album which has recieved grand praise for its playful, yet catchy approach to Technical Metal. After having successfully toured through Denmark, the UK, China and Japan and having brought their powerful live performance to such great festivals like Copenhell, UK Tech Metal Fest and Euroblast Festival, those Danish Dynamites are now more than eager to present their heavy, yet melodic and technical, yet groovy sound to the rest of Scandinavia.

Ghost Iris say this about the tour:
“​We are extremely happy to be on this tour. Like minded people and awesome bands. This is gonna be one for the books! See you all out there!"

FIGHT THE FIGHT
The Oslo based melodic Metalcore band Fight the Fight just recently released their self-titled debut record via Indie Recordings and this one is young, fresh and bursting with energy. It is a mature, well-composed rock/metal grenade with immediately memorable hooks, catchphrases and choruses. Those Norwegian Noisemakers played all the major festivals in Norway, toured Europe and received massive praise amongst others from Metal Hammer UK for their phenomenal live performances. No surprise then that their extensive touring experiences made them a tight knit unit that formed an unbreakable bond within the group.

Fight The Fight say this about the tour:

AVIANA
Hailing from Gothenburg, Aviana is a new, ambitious Metal band, which already made quite an impact with the release of their debut “Polarize” via Rambo Music / Sony in early 2017 - an album that mixes heavy, aggressive pieces with melodic sing-alongs and lyrics with a clear, strong message. Since one of the quintet´s main goals is to be one of the best possible live bands, fans of the heavier sounds out there can be certain to get some eye-and ear-candy, when these Swedish Soundwallers enter the stage.

Aviana say this about the tour:
​“We're really stoked to tour on home soil; Scandinavia with such good neighbours and bands as Fight The Fight and Ghost Iris. We're gonna bring it all!"

The Stockholm based Metalcore/Post-Hardcore quintet Awake The Dramer have made a great name for themselves within the underground Metal/Hardcore scene in Europe since their formation back in 2015. Following the footsteps of bands like Northlane, Bring Me The Horizon, Architects, the band have created a unique sound combining raw classic Post-Hardcore with the new ambient sound of progressive Metalcore.

Awake The Dreamer say this about the tour:
​“We are super stoked about joining these great bands on tour! We're also really excited to show Europe some new music!" 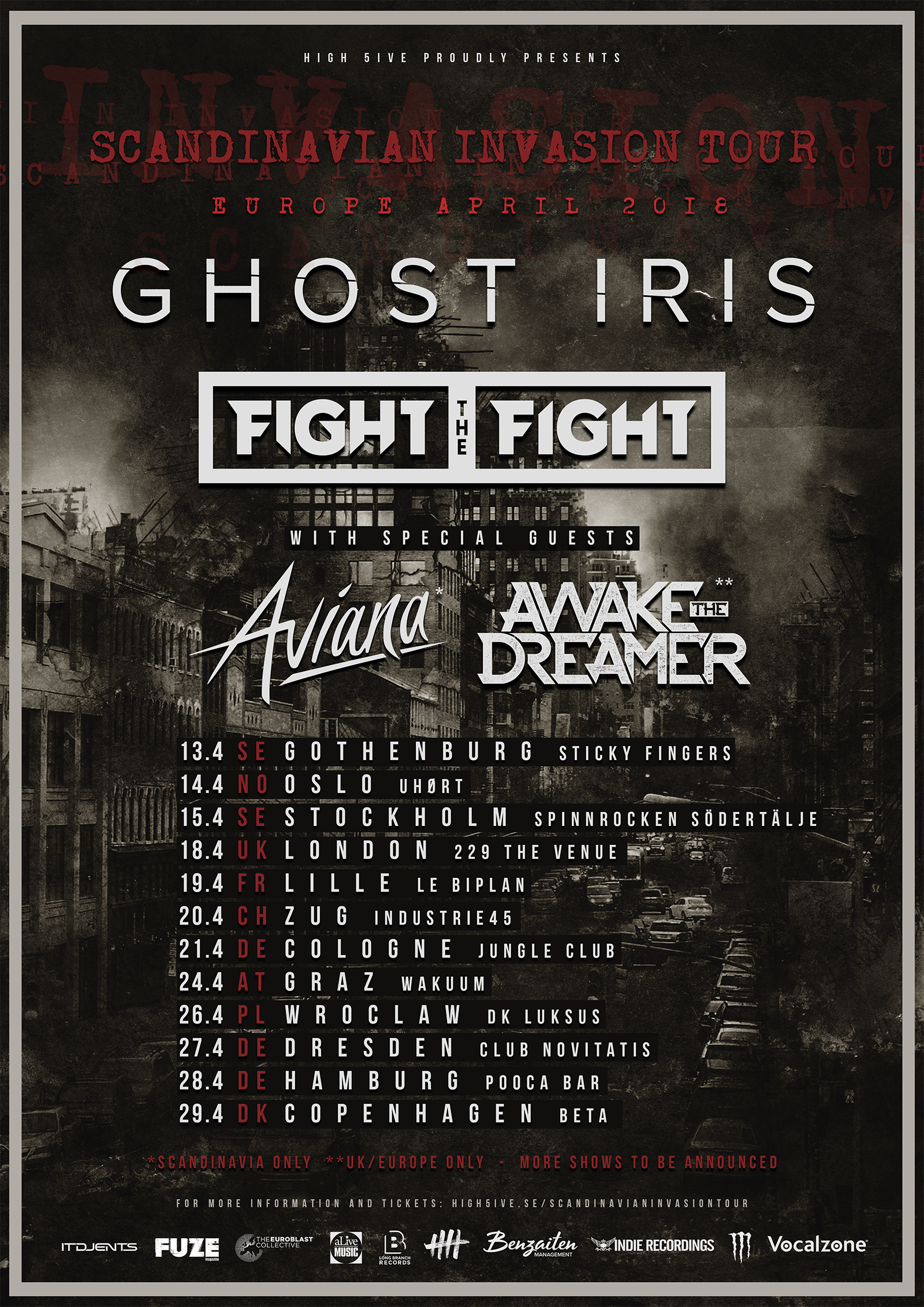 SEE YOU ON THE ROAD!